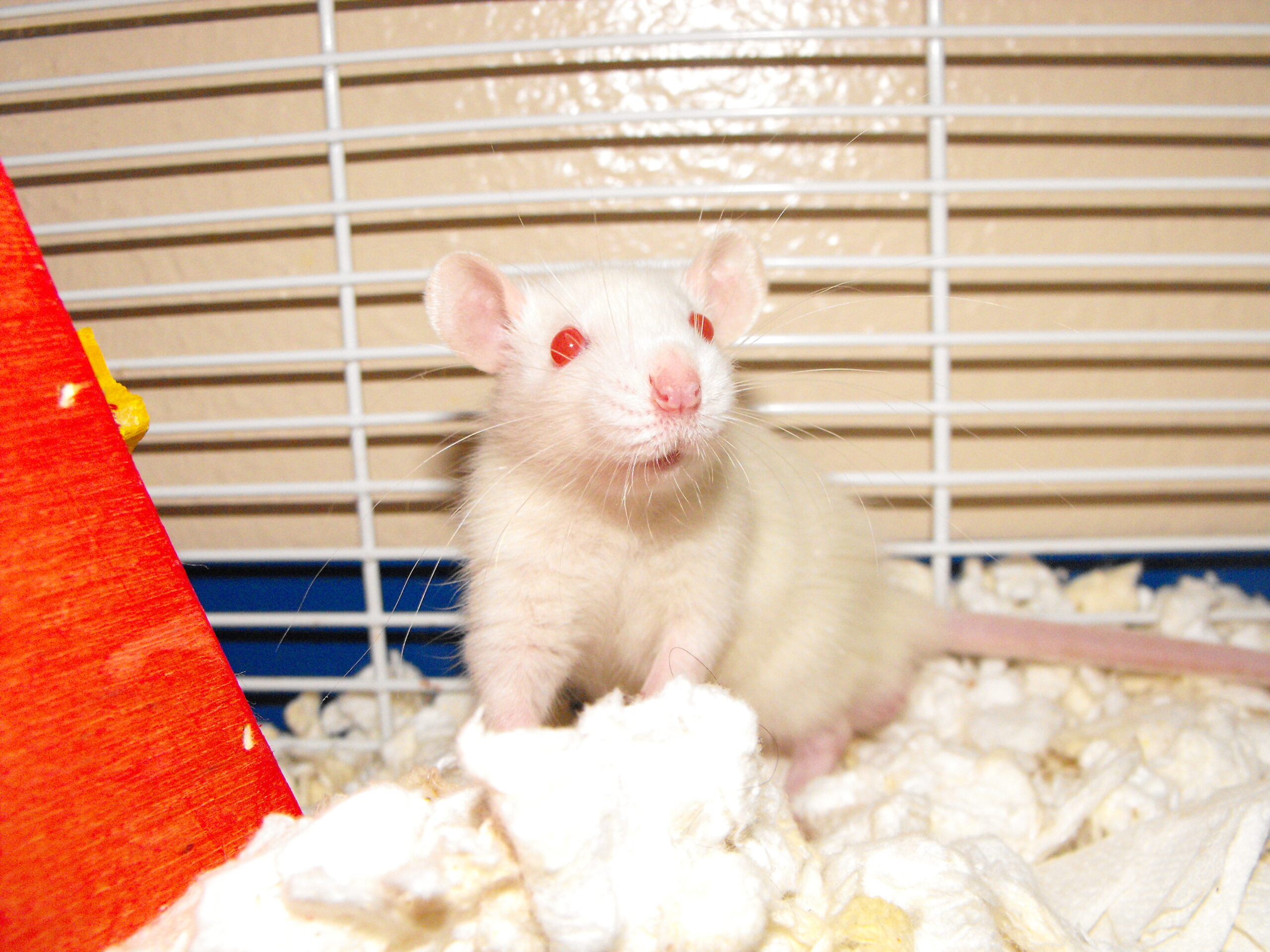 The sac rack is where animals wait to be killed after experimenters are done with them. It wasn’t that I had become okay with or even used to seeing animals on this rack, but it was a daily part of life inside an animal lab.

On most days, I walked by, I saw them, and I knew their fates. But on this particular day, I don’t know what it was, a wave of emotion flowed through me as I noticed a concerned mother rat circling her three young babies. Her hair was white, her tail was long, and her little ones were curled up together in a little white ball, eyes barely open.

“Hi, Mama Girl,” I said, as I approached the clear, plastic cage. Her protective nature jumped to cover her babies as she looked directly into my eyes. She was worried, I could feel it.

Something about knowing they were hours away from being shoved into a gas chamber broke me. For months, I’d seen animals piled on this death rack, so why them? Why now? I don’t know. But I had to try and save them.

The immediate response was no. I pushed and was told to talk to a manager who directed me to another manager. I was genuinely surprised by the resistance I was getting as death was the only other option for them so if I wanted to take them and give them a home, why not?

The end of the day was approaching and it was clear this would not be resolved quickly. I slid the cage with Mama Girl and her babies off of the sac rack while pausing to look over the cages of other mice and rats who were sleeping, making nests out of bedding, or clawing at the walls unbeknownst to what was next. I was leaving them behind.

I moved Mama Girl and her newborns into another room, safe for now. The sign on their cage read, “Please save for Lindsay,” written by another employee. It wasn’t just me who wanted to save them, other technicians rallied behind me and would visit the rats throughout the day. They’d come by on breaks to spend time with them in almost a cathartic way. It was a space that was absent experimentation. They were eager to play with them, nuzzle the babies with their nose, and let them crawl up their arms. Mama Girl was a hit and her babies were growing fast. I needed to get them out of this plastic box, but mostly, I needed them out of this lab.

After over a week of back and forth, I was finally permitted to take the rats home.

Success! Their lives would forever be different. The feeling of walking out the door with them was freeing and I was excited to let them wander, exlore, live. Mama Girl’s name stuck and I named her three boys, Rocky, Remy, and Houdini.

Houdini got his name because he was an escape artist from day one. Rocky was strong and a fearless explorer. And Remy loved food—hence the name Remy after the Rat in the movie, Ratatouille. All of them loved to perch on my shoulders.

The word rat or mouse alone can make people feel squeamish, but it shouldn’t. Contrary to what we see portrayed about these animals, they are incredibly clean, smart, and empathetic beyond what I could have ever fathomed.

They learn their names, have unique personalities, and their little hands are virtually as functional as ours. They can play fetch, perform tricks, and master puzzles. And they’re incredibly social, curious, and have outsmarted me on more occasions than I care to admit.

Before working with mice and rats, this knowledge was absent, but I quickly learned that their little lives are no different than the dogs and cats we’ve grown to love and share our homes with. Our society has built a reputation for mice and rats that is simply wrong and vastly unfair to them.

I often think back to the days when I fought to free them from that lab. Had I lost this battle, I would have felt a layer of defeat that I’m not sure I could have handled. I wouldn’t have gotten to share my life with them and this story wouldn’t have the happy ending it does.

I won’t stop until all animals are free from labs and I know you won’t either. Take a minute to help by sharing this story with a friend. Let’s spread the word that rats and mice are intelligent, social, feel pain, and aren’t ours to torture. Together, we’ll end animal testing.