The sign read “sac rack.” It was taped on the front of a metal shelving unit that held clear, plastic, shoe-box sized containers filled with little animals. “It stands for sacrifice,” another lab technician told me as I eyed the sign. Sacrifice? The word stuck with me.

The sac rack, in my experience, resembled storage racks you’d see in suburban garages warehousing soccer balls, tools, and cleaning supplies. Throughout the day, lab staff would bring cages of mice, rats, hamsters, and other small animals to this rack to be euthanized. The sac rack is simply the death rack. It’s where animals wait to die. 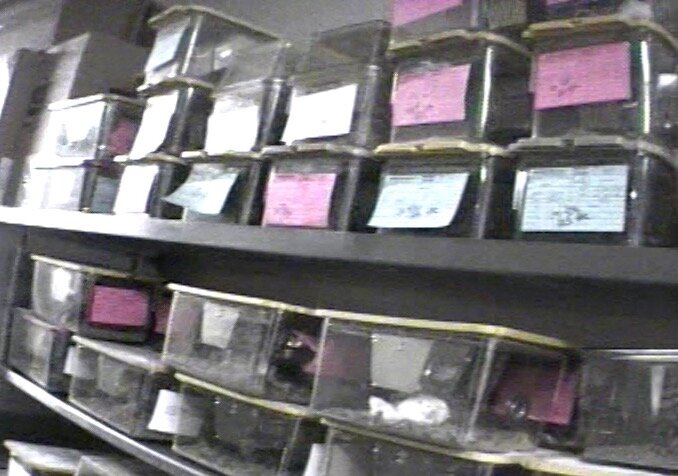 Many days there were so many animals to be euthanized, the cages were stacked on top of one another, covering the only air hole the animals had. At the end of each day, technicians in teams of two would alternate killing these animals.

As an animal care technician, I remember the first time I was part of this daily euthanasia. The animals were moved onto a cart and wheeled into a room that housed the carbon dioxide machine. They were then removed from their cages and put into the gas chamber—a box larger than the cages where they had lived their entire lives.

The gas was turned on and then we sat, waiting for them to perish. Surrounding us were cages of other, live animals—they were next. My stomach tightened and my throat was dry. Although I wasn’t the one who put them into the chamber or pushed the button, I was there. I carried the cages.

Right now, during the COVID-19 pandemic, mass amounts of animals are being killed inside research facilities as experiments are canceled. Each one of these animals, whether a mouse or a monkey, is an individual and it makes me think back to my time inside one of these labs. If, on an average day, the sac rack was overflowing with animals, what could it possibly look like right now when labs are instructed to kill off as many animals as they can?

Our team at NEAVS is hard at work uncovering evidence that explicitly highlights these deaths. In an email from the University of New Mexico, one worker writes, “I’m going to sac most of my colony as we won’t be able to do any experiments for quite awhile…”

Another email regarding a mouse to be killed read, “I am not sure where I should put him after I sac him because his body will be toxic waste.”

We’ve obtained similar evidence from the University of Florida and potentially others as the timing coincides. Like Montana State University, for example, where “All animals euthanized. Room empty” was written on a daily health record for guinea pigs.

And another from the University of Kentucky where the document reads, “Please euthanize all animals.”

The number of animals being culled at this point is unknown, but it’s likely thousands, if not hundreds of thousands, if not millions. And if these animals can so swiftly be killed, it calls into question why any of this research is being done to begin with.

My heart goes out to not only the animals whose lives are being carelessly disregarded, but also to the technicians who are performing these mass killings—packing the CO2 chambers, waiting for the animals to die, and then shuffling in the next batch. Cage after cage after cage. On any given day “sacking” animals was already an emotion-inducing experience and one many of us tried to avoid.

For anyone working inside of a lab who is struggling with this, I’d love to hear from you. Even just to talk in a safe, judgment free space. No pressure to be a whistleblower, no pressure to call anything out. But I know those pit of stomach feels when you hear the air escaping from an animal’s lungs, or little feet scurrying inside of a gas chamber before the silence hits. And I know you know them too.

Prior to joining NEAVS, Lindsay spent years in the field as an undercover animal cruelty investigator.