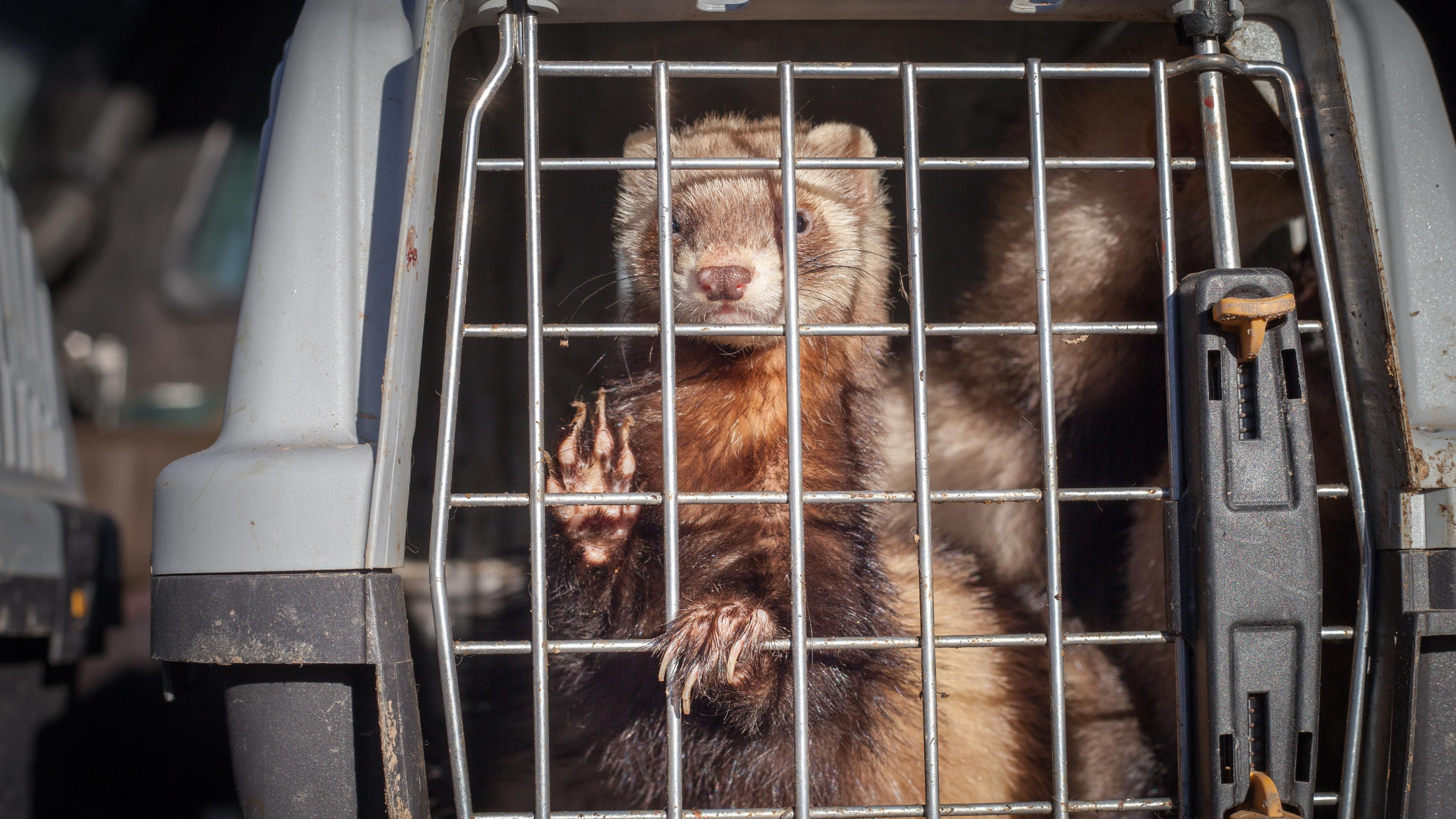 Not all animals scream when they’re hurt.

Reading about cruel animal experiments is part of my job—the hardest part of my job. While difficult, it’s necessary to free animals from suffering in labs. Every now and then, I read about something so horrific it sticks with me long after I read it. That’s what happened when I read about a cruel ferret experiment at the Oregon Health & Science University (OHSU) in 2015.

Ferrets are a big part of my path to animal advocacy and they hold a special place in my heart. They’re cuddly, fluffy, wild, and goofy! They have massive personalities and are like furry balls of energy. They have favorite snuggle spots, opinions about which toys are the best, and treat preferences.

One thing that stands out about ferrets is the kind of noise they make. People ask me all the time: “What do ferrets sound like?” Those unfamiliar with the small animals are often looking for an answer that they meow, purr, or bark in some way. Instead, I respond that ferrets don’t make a lot of noises. If they’re hyper and playful, they occasionally dook, which sounds like a chirp.

Even when ferrets are in pain, they don’t yelp or scream like other animals. I know this because some of my ferrets experienced illness and associated pain in their lives. Even at the end, when I knew they were hurting badly, they didn’t tell me by crying or making noise. They were quiet through it all. And that’s what disturbed me about the experiment NEAVS uncovered at OHSU.

An approved protocol used a “head-fixed” restraint to ensure the ferrets were awake and “behaving”—that they couldn’t move. Ferrets were forced into these restraints once or twice a day, for up to two hours at a time, for a duration of three weeks. They were monitored by video the first couple times they were restrained. For the rest of the restraint time, they were only checked once every five minutes.

We see a lot of evidence of restraints in documents we uncover. What made this one especially terrible was how the experimenters measured stress. The protocol stated that the ferrets would be removed from the restraint if they showed signs of stress through “vocalizations or persistent struggling” for longer than a minute.

All I could think was that this measurement was absurd! It completely disregarded that ferrets don’t often audibly cry. It ignored that they wouldn’t vocalize for over a minute straight. It exploited the fact that ferrets are silent sufferers.

This approved protocol demonstrates that the so-called scientists doing this experiment did not understand a fundamental fact about the animals used—that ferrets won’t vocalize for over a minute. This alone impacts the credibility of any results from this study—how can their results be trusted, when they clearly don’t understand their test subjects?

Moreover, the protocol explicitly stated that the animals would only be checked once every five minutes. How would they even know if a ferret struggled for over a minute?

Five ferrets were tortured in this protocol at OHSU in 2015. Their natural silent reactions to pain were used against them. The protocol let experimenters ignore the ferrets’ attempts to make the pain stop. This suffering should never have happened.

OHSU’s cruel torture wasn’t left behind in 2015. NEAVS uncovered photos of an experiment from June 2019. In this experiment, the ferrets’ brains were cut into and the animals were forced to wear permanent skull caps. Ferret #100591’s (pictured) skull cap became infected and the surrounding skin was “moist with foul-smelling crusty exudate.” After undergoing literal brain surgery, this individual was then restrained by a device and forced to perform behavioral tests. Another ferret with a skull cap, #270877B, was seen rubbing its head against fabric inside a cage.

OHSU was cited for not reporting that the ferrets were scratching at their skull caps, as was required by the protocol. They were also cited for storing the gauze and non-stick pads—used for cleaning surgical sites to minimize infection—in unsanitary, rusted containers.

Not only did these ferrets have their brains cut into and skull caps placed, their surgical wounds were cleaned with unsanitary materials. Then they were restrained and forced to perform tasks.

Every ferret I’ve had the pleasure of meeting is a sucker for head and ear scratches. They’ll lay down and press into your hand when you start to scratch their little heads and ears. They get so into it, too, pushing against you and holding onto your hand with their small front paws. To force these animals to wear a plastic or silicone cap over their head wounds is a major deviation from proper welfare standards for these animals. It reinforces how these experimenters don’t understand the basic needs of their test subjects.

After seeing these heartbreaking accounts, I made sure my ferrets knew how loved they are, with long head rubs and extra treats. It’s hard to accept that in 2020, I can’t do anything to take away the pain those five individuals experienced in 2015. That I can’t let them know that I heard them through their silence. And seeing such scary photos without being able to scoop #100591 and #270877B into my arms, where I protect them and rub their tiny heads, simultaneously breaks my heart and fuels my dedication to freeing these animals.

I know that with your help, NEAVS can continue to uncover the experiences of animals in labs. We can tell their stories and we can work to make sure every animal is free.

Please take 1 minute to show the world I STILL CARE what happens to animals in labs.

YES, I WILL KEEP FIGHTING UNTIL EVERY ANIMAL IS FREE FROM TORTURE IN LABS.