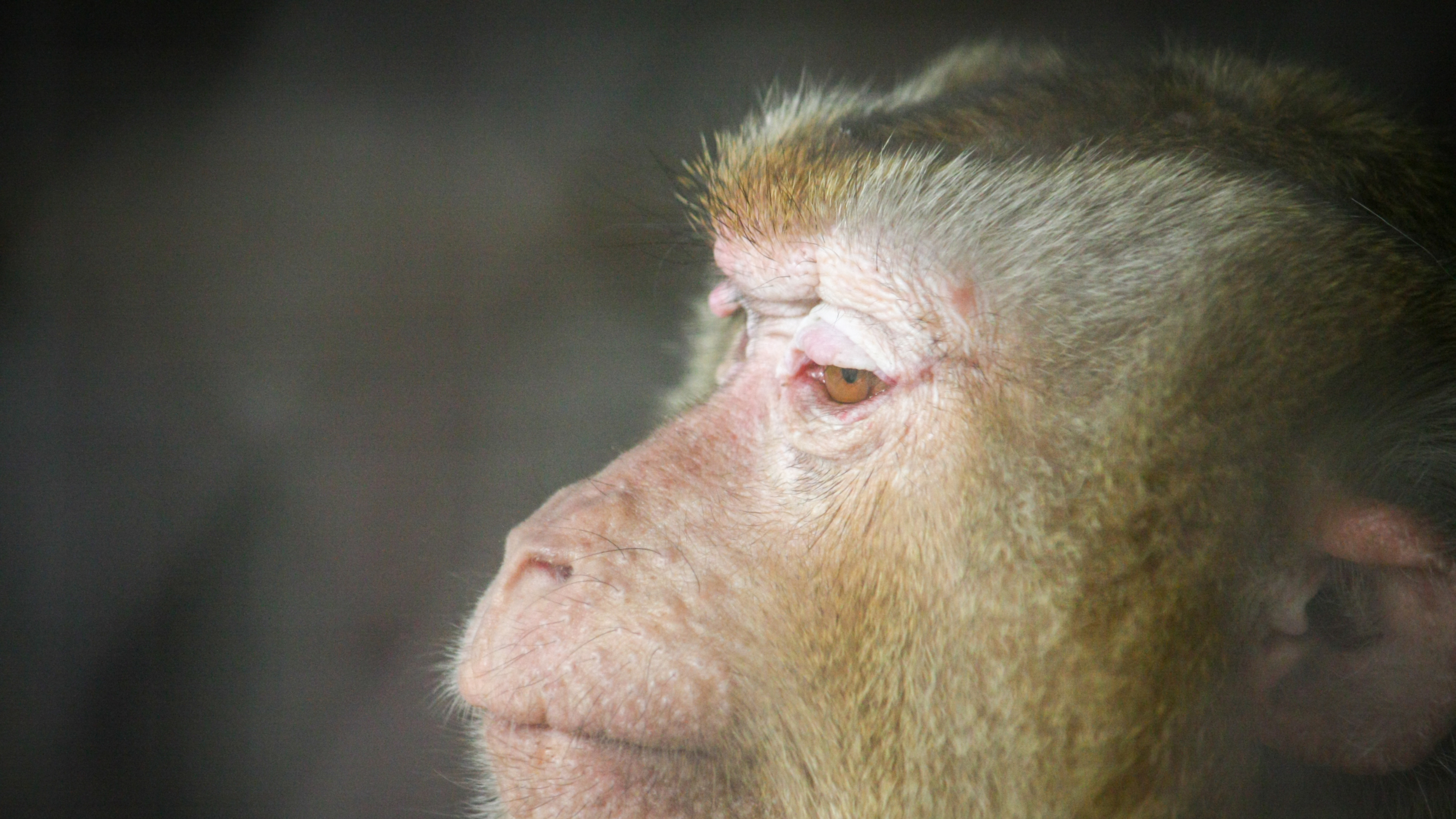 A Badger Trapped Inside a Monkey Lab

This is a guest blog by Sam Issleb, former student animal caretaker at the University of Wisconsin’s Harlow Primate Lab and Wisconsin National Primate Research Center.

Labs don’t want you to know what I know, saw, felt, and still feel. They do not want to address the pain and suffering they cause. They are afraid to acknowledge that they’ve built a system that allows them to do horrible things to animals without repercussions. They cause unimaginable suffering, because there are no suitable laws or regulations in place to protect those whose voices are deliberately suppressed. You deserve to know the truth.

On weekends I was part of the animal caretaker team. I’m being generous using the word “team.” It was me and one other person. Two college kids responsible for taking care of 500 primates!

Imagine windowless rooms, cages stacked on top of each other, and animals collectively shrieking so loud that at times it was deafening. They’d violently shake the front of their cages like they were looking for a way out. In truth, they didn’t even know what “out” was.

They’d never even seen daylight. More than likely, they never would.

I’ll never forget moving from cage to cage and room to room in this controlled chaos. Praying that there’d be no new injuries to discover while doing welfare checks for the three floors of primates. We had to carry flashlights, because in some of the animals rooms, it was too dark to see clearly into their cages. It was fairly common for the monkeys to get their fingers caught in the hinges of their cage doors, often resulting in lost digits. If there was a fight between two housed animals—or worse, if an animal escaped its cage—injuries were typically far, far worse.

I wish I could say this was out of the ordinary. It wasn’t. This was every weekend.

Despite the horrible things I witnessed, I continued to work at Harlow for three years. I couldn’t leave the animals behind. While I was there, I knew they would receive the best care from me. Leaving meant I couldn’t help them at all. Sometimes I felt as trapped as they were.

Monkey BC60 was one of the animals I couldn’t leave behind. For a time, I named her Bailey but had to go back to calling her BC60—it was too gut-wrenching to give her a name. Naming her threatened to break the thin wall I had built to protect my mind while I worked there. I couldn’t pretend our relationship, this environment, was healthy or normal.

She was constantly rejected by the other monkeys. Bailey bounced from cage to cage between periods of isolation, an outcast never finding her place. As each day passed I could see the toll this took on her. She withdrew. She became aggressive and unrecognizable from the sweet monkey that used to present herself for grooming whenever she saw me.

Getting the truth out

Bailey’s story and those of all the animals trapped in labs need to be told and shared. Nothing will change for these animals until people are educated on the truth about the animal research industry. I truly believe that if people had the opportunity to witness a day in the life of a lab monkey, they’d be outraged.

Thank you for reading. I was inspired to come forward and share my experience because of another University of Wisconsin student and Harlow lab caretaker, Maddie Krasno. Maddie’s bravery despite the attempts by UW-Madison to silence her, made me realize how important it was for me to come forward. Learn more about Maddie and her experience as a Harlow lab caretaker here.